I followed the Journey of the Youth Olympic flame across Singapore on 7th, 11th and 13th August. Despite some flops with the YOG cheer and an overblown budget, the ancient Olympic torch tradition still worked some magic. On the ground, my camera captured Singaporeans, young and old, who were there to cheer the flame. See it for yourselves. 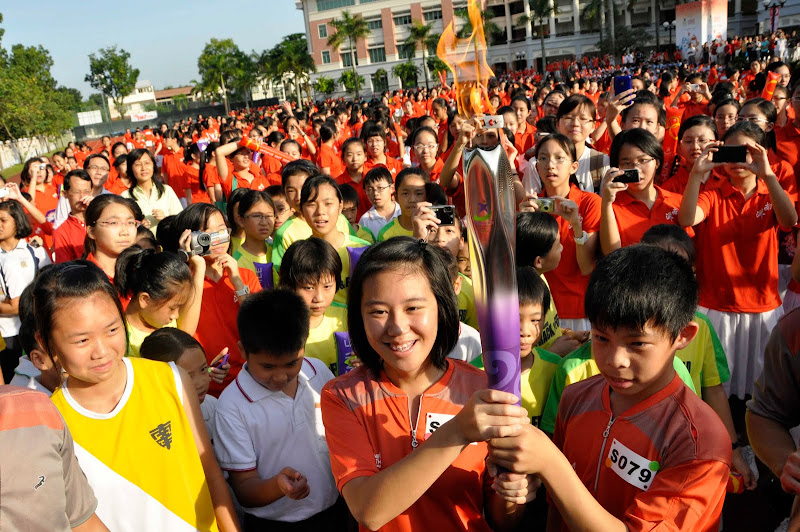 Surrounded by her schoolmates at her school, Aurelia Chan from Nanyang Girls High School receives the torch from Keith Wong of Nanyang Primary. Hundreds of students turned up in the early morning to cheer on torch bearers, which are students nominated by teachers and friends.

My photo was published as part of a Photostory in the Young Olympian Daily, a special daily newsletter created for athletes living in the Youth Olympic Village: 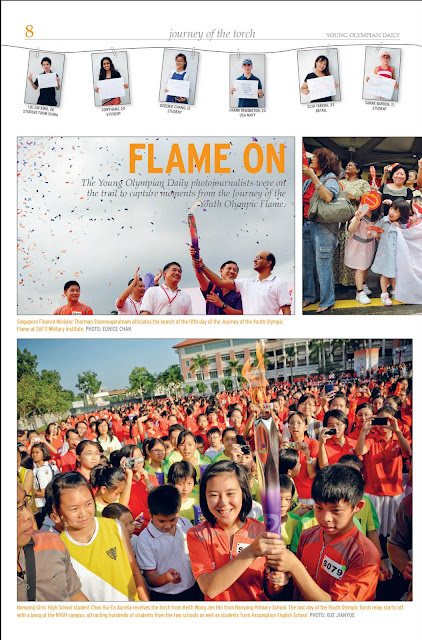 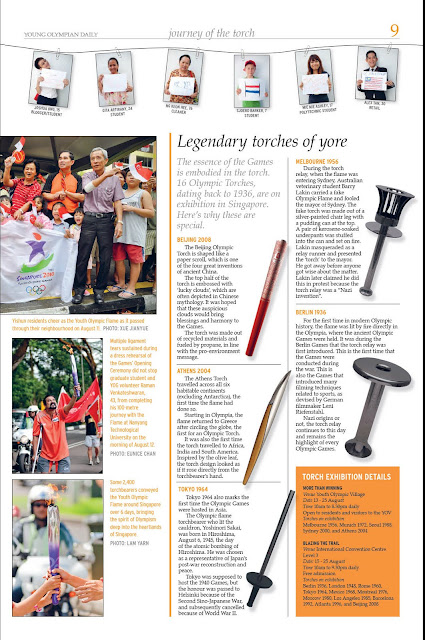 The top right image is seperated into 2 pages, so here is the intact one: 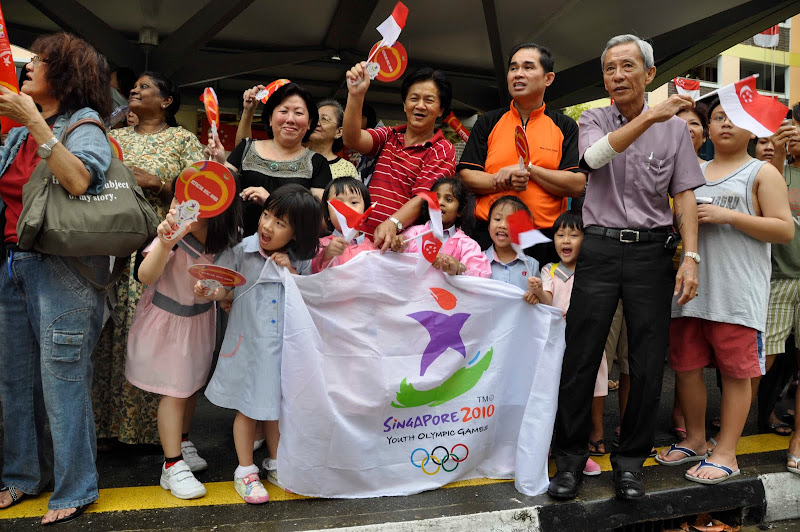 Crowds at Nee Soon South waiting for the arrival of the flame. As a result of heavy rain, the torch relay schedule had been delayed for more than an hour. However, the spirit among the crowds, including young children from a kindergarden, remained high.

There are a few other photos that I liked: 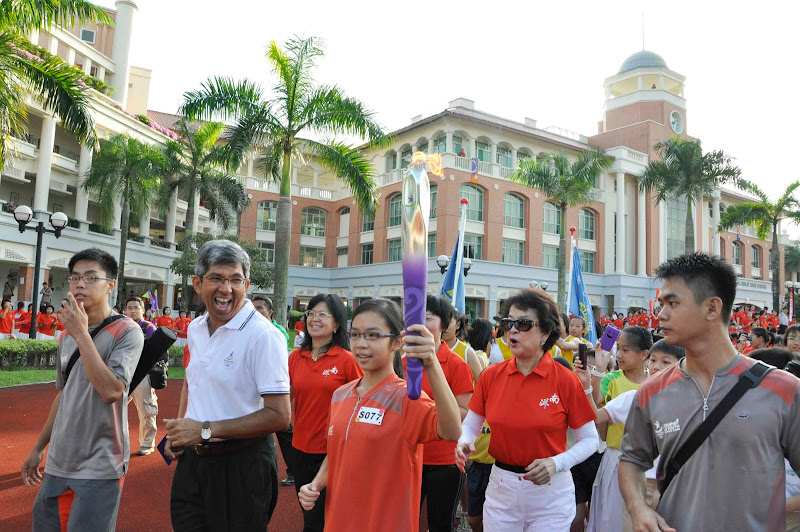 NYGH student Lim Ying, the first torch bearer of the day, runs with Dr Yacoob Ibrahim,  Minister for the Environment and Water Resources and Minister-in-charge of Muslim Affairs. 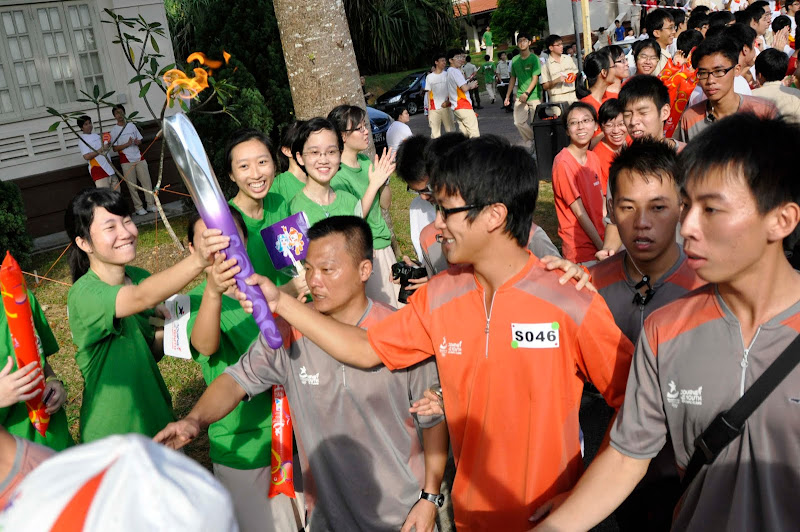 Students at Hwa Chong Institution get a feel of the torch. 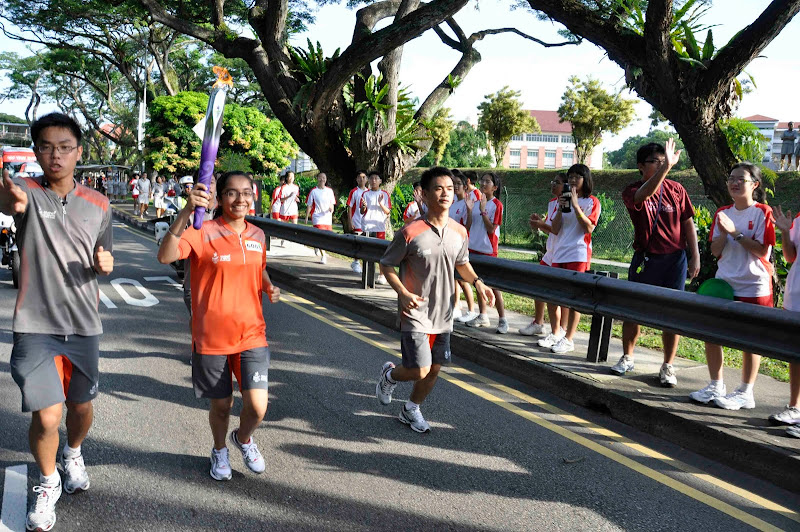 Jaspreet Kaur from NJC running with the torch along Dunearn Road. 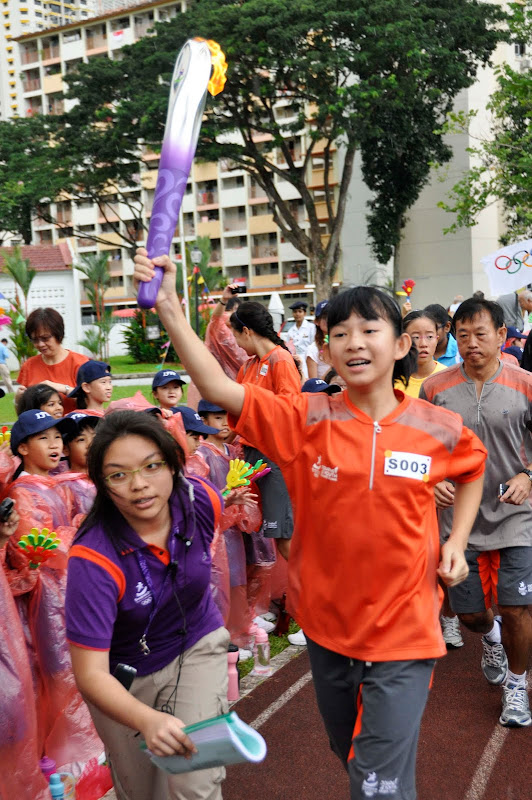 Gabrielle Koh from CHIJ Toa Payoh running with the torch as the volunteer beside her rushes along to protect the sacred flame and its holder from the excited crowd. 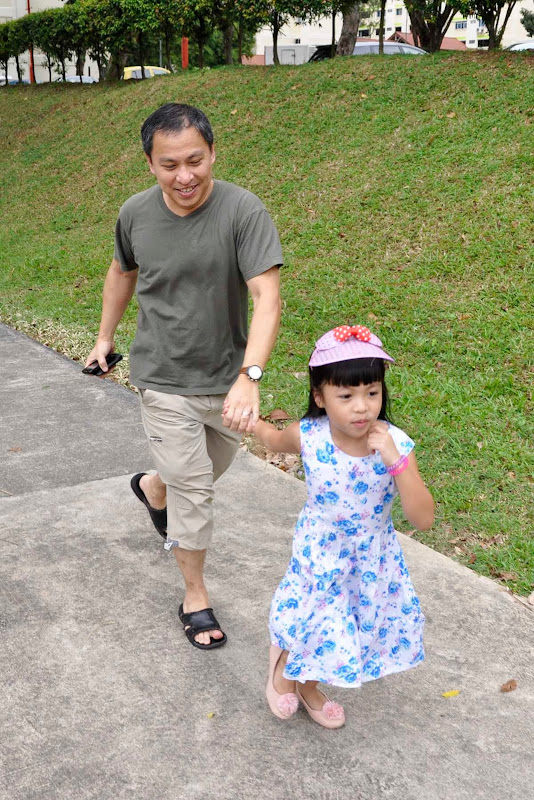 A little girl pulls her Dad as she tries in vain to catch the flame in Ang Mo Kio, which was disappearing ahead of her as she shouts "faster! Daddy, run faster!"
Some Reflections:

It was my most exhausting shoot as I battled sun, rain, slippery roads and excited crowds. Without access to a media van, I had to chase the Olympic torch on foot. Sometimes I used the MRT and bus to do shortcuts. Despite the lack of logistical support, I decided to challenge myself to capture unique angles that you cannot get from a media van. While there are disappointing moments when I missed the torch and got blocked by aggressive photographers, I guess there is always an opportunity if you try hard enough.
I hope you enjoyed the pictures.
Posted by JX at 10:46 AM