This is a story I wrote back in August 2010. It was submitted to the Nanyang Chronicle, ran into several problems, postponed for a later date but I eventually spiked it myself. It lay forgotten in a desktop folder until last night, I chanced upon it. I'm publishing it here just in case I will never remember it again. 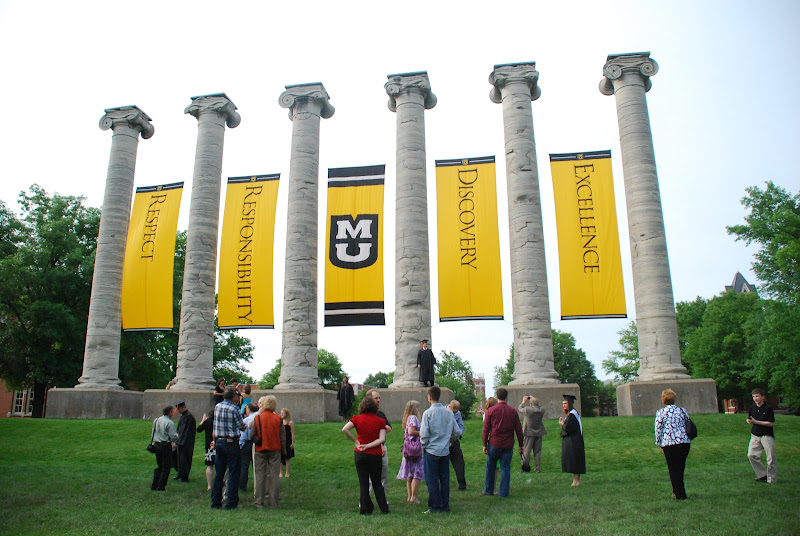 (Above) The "pillars of fire" at Brad Pitt's Alma Mater, University of Missouri. The second-most photographed site in Missouri is what remained of an old school hall that burnt down in the 19th century. Today its a symbol of the world's oldest journalism school and the university's values. Photo by Xue Jianyue.

Into the heart of America

CORN fields, grass prairies and barbecued ribs. These memories return back, like a recurring dream, after I left the American midwest state of Missouri.

I seemed to have forgotten that early this year, a freezing winter greeted my arrival in Kansas city. The entire land was covered in thick, white snow.

My first footprints, along with my impressions of America, were knee-deep in the bitter cold. I wondered how could this be the land which inspired the Wizard of Oz.

For the next five months, I would visit three main cities within this state- Kansas City, Columbia and St Louis City.

I could not hide my excitement. After all, this is the place where I could find the famed St Louis ribs, try out American farm life, and study in the alma mater of Hollywood star Brad Pitt, the Missouri School of Journalism.

Cold weather has enlarged my appetite. As I was to discover, the Midwest had fabulous food like the St Louis style barbecued ribs. Even Starbucks coffee were sold at half of Singapore’s price.

Not to mention authentic Mexican food, cooked by Hispanic immigrants from the south of US. They were surprisingly similar to Asian food, with rice, beans and spices.

I had to be cautious with Chinese food though, for the Americanised version in many restaurants cannot compare to those back home.

Fortunately, as I was to learn from some Singaporean friends living in the US, there are “hidden menus” in Chinese restaurants, recited from memory by waitresses who meet a Chinese customer once in a while.

The friendliness of Americans also brought warmth to my heart. Upon arrival, I was treated to fabulous food at Shakesphere’s Pizza by my exchange coordinator in Columbia.

In Missouri, state laws require bars to close at 1am. But Americans make it up with house parties, where you get to socialise, drink and talk about life.

Your best shot at fame

For more than four months, I stayed at the small town of Columbia, studying at the University of Missouri-Columbia (MU)

Despite its relative isolation, it is home to the world’s first journalism school and the birthplace of photojournalism.

Students are trained using the “Missouri Method”, which emphasizes learning through hands-on work, turning the small town of 100,000 into their arena.

As a result, Columbia is said to have the most number of journalists per capita where everyone living here has been photographed. Chances are, if you stay there long enough, you will end up in a newspaper even as an ordinary person.

The place also has a beautiful campus. An iconic landmark, Pillars of Fire, is what remained of an old school hall that burned down in the 19th century. It is said to be the second-most photographed place in the whole state and a symbol of the University’s values.

Perhaps the school’s most famous alumni is Brad Pitt, the Hollywood actor. Unknown to many, Pitt left barely 2 weeks to graduation in 1982, flying off to Los Angeles to take acting lessons.

To my amusement, many students in MU told me that they are still trying to get him back to graduate.

An American friend, William Aitch, drove me and a few other fellow exchange students to his home in the Midwest countryside.

I was driven past vast tracts of land, populated by more cows then men. Corn fields stretched out aimlessly into the horizon, where I could occasionally make out an outline of a farmhouse.

William would rumble his four-wheeler on rocky paths through the forest. We, his passengers, would cling on to any part of the car for dear life, until he comes to a sudden stop at a lake for fishing.

I also tried out a favourite American hobby - climbing trees. On the farmland, I got to mix with cows and horses which roam within fenced boundaries.

There is hardly any police, and hardly any crime. It is a carefree place where neighbours, though living far apart, help each other in need.

Not just farms and cows

My last weeks in Missouri were spent in St Louis, the gateway of the Midwest.

I went up the famed Gateway Arch, built as a monument to the Westward expansion of the United States. Built in 1965, it was the tallest monument in the country and an icon of St Louis.

From the top, I could see the whole of the city, a blustling hive of activity along the Missouri river.

Two centuries back, famed explorers Lewis and Clark departed crossed its waters into the realm of Red Indians, wild Buffalo and cries of the American bald eagle.

Today, St Louis is scene of modernity. In its dense urban environment, I learnt that the Midwest is not all about corn fields and farm life. There are American brands like Forever 21, H & M, Charlotte Russe on the streets.

However, unlike touristy areas like New York and Los Angeles, Midwestern cities are relatively cheap for accommodation and transport due to low petrol prices.

The heart of America

Due to its distance from the coast, foreign cultural influences are not strong in the Midwest.

People also have a deep sense of loyalty to their town and neighbourhood. In local town sports events, the atmosphere of support is electrifying.

A basketball match is often watched by a large loyal alumnus, who return without fail every year. They redid their school cheers even as older folk, wearing the same smile they had years ago as a youth.

But the intense national pride and inward looking worldview also meant that America are apathetic about the world outside their town. While knowledgeable about the places in their vicinity, they can even get confused about the location of their own states within US.

But midwestern Americans are far from homophobic. Even as refugees from Iraq, Cuba and parts of Africa are arriving in large numbers into the Midwest, the community had been supportive of them.

When government aid falls through, Americans mobilise and form local support groups. Whether religious or secular in origin, both worked hard to help refugees in anyway they can.

Perhaps Americans, being an immigrant society, had a culture that always reached out to newcomers, welcoming them into the American dream.

While things can get inconvenient in Missouri due poor public transport, freezing cold or confusing maps, I always knew there are people I can count on in this heart of America.

1) Visit a house party. Bars close early in Missouri but Americans make up for it at home.
2) Climb up the famous Gateway Arch and get a breathtaking view of St Louis.
3) Rub the nose of the David Francis statue in Missouri School of Journalism. Tradition states that it will get you an ‘A’ for exam.

1) Stay outside past 10pm. Certain city districts, even near downtown, can be dangerous when night falls.
2) Drink alcohol while walking on the streets. It is illegal.
3) Speak under the Journalism Arch at Missouri School of Journalism. Tradition states that you will fail your exams.
Posted by JX at 12:25 AM